What you need to know about Saturday’s parade

Third Street from North Front Street to Dock Street will be closed to vehicle traffic starting at 9:30 a.m. and until about 12:30 p.m., before and during the parade. (See attached parade map.) The closure also will affect traffic on some side streets along the parade route. Barricades will be erected at intersections and Wilmington Police Department officers will be posted at key locations to keep traffic moving smoothly. 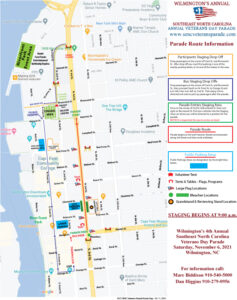 he salute to veterans, active-duty military members and reservists kicks off at 10:15 a.m. on Third Street in front of City Hall with a performance of patriotic-themed and other dances by the Beaches & Boots line dancing troupe.

Patriotic music will continue to be played by a disc jockey until about 10:55 a.m. as a 40- by 60-foot American flag is rolled out and unfurled along Third Street near City Hall. Anyone along the parade route who wants to help with the unfurling is welcome to join in the fun and inspirational activity.

Ethan Powell will lead the Pledge of Allegiance at 10:57 a.m., followed by the singing of the National Anthem by the UNCW Seabelles choral ensemble.

As Reveille is played on the bugle by Steve Luck, the Bandit Flight Team will perform precision maneuvers over the parade route to signal the start of the parade at 11 a.m.

Leading the parade of 85 entries and about 1,800 participants will be the 208th Army Band out of Concord, N.C. Representing the Navy in the parade will be the U.S. Fleet Forces Band, based in Norfolk, Va. The Second Marine Aircraft Wing band out of Cherry Point, N.C., represents the Marine Corps in the parade.

The military bands will be joined in the parade by headliners The Citadel Regimental Band and Pipes and the University of North Georgia Golden Eagle Band as well as high school marching bands from the Cape Fear Region, two pipe and drum bands and a fife and drum band.

Grand marshals of this year’s parade are women veterans, active-duty women in the military and women reservists. The parade theme this year recognizes Wilmington’s selection as the first World War II Heritage City in the nation.

Girl Scouts from the NC Coastal Pines council will distribute free parade programs and American flags along the parade route.

After the parade, local band the Clams and the 208th Army Band will perform on stage at Live Oak Pavilion in Riverfront Park as part of a Veterans Day-themed celebration and information fair that starts at 11:30 a.m. Refreshments will be available from food trucks near the venue.

Go to the APPLICATION page to join in the Parade or go to the CONTACT page and fill out the form to INQUIRE, SPONSOR or VOLUNTEER for the 2021 Parade!